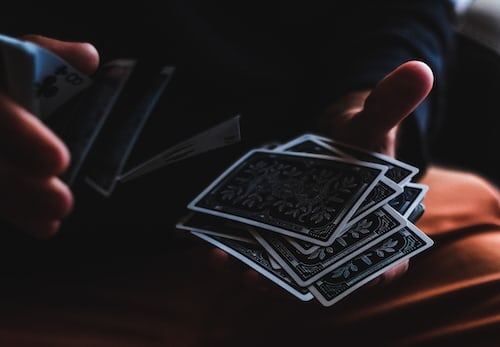 "Power from our Mother Moon, flow through me from you, to use these cards and use them true."

The tarot (/ËˆtæroÊŠ/; first known as trionfi and later as tarocchi, tarock and tarot) is a pack of playing cards, used from the mid-15th century in various parts of Europe to play games such as Italian tarocchini, French tarot and Austrian Königrufen. Many of these tarot card games are still played today. In the late 18th century, it began to be used in parallel for divination in the form of tarotology and cartomancy and specialist packs were developed for such occult purposes.

Like common playing cards, the tarot has four suits (which vary by region: French suits in Northern Europe, Latin suits in Southern Europe, and German suits in Central Europe). Each suit has 14 cards, ten pip cards numbering from one (or Ace) to ten and four face cards (King, Queen, Knight, and Jack/Knave). In addition, the tarot has a separate 21-card trump suit and a single card known as the Fool. Depending on the game, the Fool may act as the top trump or may be played to avoid following suit.[1] These tarot cards, without occult symbology, are still used throughout much of Europe to play card games.

In English-speaking countries, where these games are not played, tarot cards are used primarily for divinatory purposes, usually using specially designed packs.[1] The cards are traced by some occult writers to ancient Egypt or the Kabbalah but there is no documented evidence of such origins or of the usage of tarot for divination before the 18th century.[1]